Are you bored of having THAT talk with him about putting a condom on, or do you get embarrassed even trying to bring it up? Are you after a contraception method that you can rely on, but don’t fancy the hormones of a pill or implant? Do you want protection from both pregnancy and STDS? Say hello to LUWI.

I was invited to the Ham Yard Hotel for dinner, drinks and a deep discussion about contraception with LUWI founder, Lisa Kinsella. What an inspiration Lisa is, honestly. She’s had quite the life experiences, surviving both breast cancer and a divorce and finding herself back in the dating game again. But she discovered that, there’s nothing out there that females can use themselves for sexual protection.

Aside from taking the contraceptive pill which doesn’t protect you from STDs, the condom protects you from both but that’s difficult for us to take control. We can’t exactly strap him down and force a condom onto his penis. I tried once, but he bit through the gag. Just kidding!

The statistics show that men wear condoms 5% of the time, preferring to not use them at all; and 50% of us will contact an STI/STD by the time we are 25. More worryingly, London has the highest percentage of STI/STDs in the country. 65% higher in fact. Shit. We need something that we can take control of for our own protection. That’s when LUWI was born. 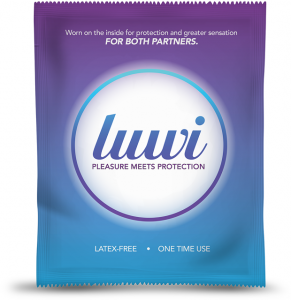 LUWI is a contraceptive method that fits inside of the vagina, but unlike the elusive diaphragm (I’ve never used one) it has similar feel and shape to a condom. The inner ring bends inside whilst the outer ring sits nicely at the entrance – offering sexual protection without that tight and off-putting feeling to the penis that condoms give.

Similar to a tampon insertion, you just push the inner ring inside and that’s it! In this rather open and sexually happy society, we need to ensure we’re using sexual protection every time we have sex. LUWI lasts up to 8-hours so, you can have multiple sessions. YAY! But, LUWI is one time use, in similar fashion to a condom but insertable. After those 8-hours are up, you throw it. Please don’t try re-insert a few days later. Oh dear God no.